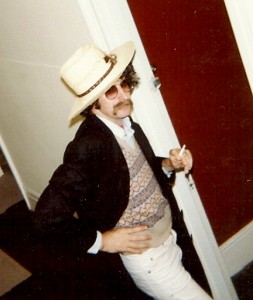 Neil Gardner was born in Wynyard, North West Tasmania, in 1949 and raised nearby in Smithton and Burnie.

The first Tasmanian artist to record and release a vinyl album of his own compositions (Anthem for Wednesday in 1971), Neil has been writing songs since the mid 1960′s when he was part of the Brumida network of young artists and writers on the North West Coast.

He was influenced by the early years of rock, the folk song revival and protest songs of the sixties particularly Peter, Paul and Mary, Donovan and Dylan, and his all-time favourite band the Beatles.

His music contains a variety of styles and genres ranging from the sublime to the ridiculous.  These include lyrical, pastoral ballads, avant-garde, macabre country songs and songs with a touch of vaudeville and the 1920’s about them.

After nearly thirty years as a public servant in Hobart, Neil has now come out of retirement to spend more time with his cats and work on his music.  He has recorded six albums to date and has a number of still to be recorded albums up his sleeve.