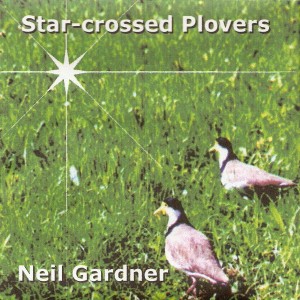 Ginger Mixture had finally been completed by the early 1990s, by which time there was nowhere to launch or promote it. The album sank without a trace and me along with it. A year or so later I heard of a vibrant venue that had emerged at the New Sydney Hotel. By that time I had written some new material notably two country and western spoofs, “The Nature Strip of Life” and “The Existential Cowboy.” The latter was a title I had carried round in my head for more than a decade. 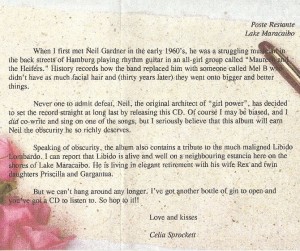 A chance meeting with Malcolm Brooks at the New Sydney led to my giving him a rough demo of “The Nature Strip of Life”. He said he knew someone who could do things with it. That someone was Ross “Frog” Clark, a very gifted country musician who had set up a recording studio at his house in Bridgewater. A little while later Malcolm gave me a tape of what Frog had done with the song. It was the full “Nashville” treatment. This led inevitably to a new album – my “Nashville” album if you will.

Unlike “Ginger Mixture” where I was trying for a big production sound, “Star-crossed Plovers” had a simpler and more acoustic feel. My previous albums had consisted of ten or so serious songs with two comic relief tracks. With “Star-crossed Plovers” I had a 60/40 mix of comic songs, some of which were quite black (bizarre even), and some very seriously melancholy songs reflecting on the end of a 15 year relationship. I hope this mix enabled me to get away with any excesses at either end of the spectrum.

1. In a Little Sheltered Workshop in Old Hong Kong

This was also a title that I had carried around in my head for quite some time. Eventually I was inspired by the thought of a batch of exploding condoms that caused hapless lovers all over the Far East to explode during coitus. The manufacture and booby trapping of said condoms was traced back to the staff of said sheltered workshop. Frog added some nice Oriental touches to the backing.

2. Pretty Girls Can Pick and Choose

This song, about the depressing frustration of re-adjusting to single life, is a fair reflection of how I was feeling and thinking at the time. However, in hindsight I now concede that life for pretty girls is probably fraught with its own difficulties that I will never experience. Peter Costello from the Doublemen provided the lovely country flavoured fiddle.

This is another number about a self satisfied but stupid hero figure. I let Frog have his head with this one. He can always be trusted to come up with a clever and effective country arrangement.

4. The Tall Trees of Winter

This song was originally written in 1970. In the mid nineties, I revisited and updated the song to include current developments. For all its melancholy, there is still a hint of pantheist resolution about it and I think it is a pretty fair reflection of Hobart on a rainy day.

5. The Nature Strip of Life

This is Frog’s masterpiece as producer and arranger. It is a purely fictitious number about certain imaginary persons who are no more than pieces of “Dogshit on the Nature Strip of Life.”

This whimsical little piece about body image, with a 1920’s feel to it, is a personal favourite. Tor Fredheim, also of the Doublemen, provided twelve string and mandolin. My daughter Amy played the saxophone.

This number started life in the 1970’s as the “Airport Song” a song of farewell. It was remodelled in the 1990’s to include other forms of farewell. I had intended Malcolm Brooks also of the Doublemen to play autoharp on this. But in one of my “extremely rare administrative cock ups” the rehearsal tape I gave him was in the wrong key. Sorry about that Malcolm.

This is a fun piece about the trials of adolescent high school love. “There’s an antelope in my jodphurs.” The Cockies provided the backing vocals.

The lyrics of this number as well as the lead vocals, were provided by Celia Sprockett. I accept no blame or responsibility for either of them. I believe the subject of the song is a much maligned young lady by the name of Deidre Smellbound.

This largely fictitious song was very loosely based on the second worst hangover I ever had. That occurred in Albeura Street in 1972. Needless to say I did not really wake up to find the girl of my dreams in my bed. But neither did I share my bed with a band of greasy tango musicians. It was another case of carrying a catchy title around for a long time before the appropriate (if that’s the right word) lyrics presented themselves.

The lyrics to this song took some years to craft and I rate them among my best. But I couldn’t produce the arrangement I could hear in my head. I probably should have left it all to Frog. The string instrumental section he provided is truly beautiful and probably the best bit of the album.

This was the last song I wrote in the 1980’s. It was a prayer as much as a song and it is a pretty fair reflection of where my mind was at that time.

Neil was described recently as an icon on the Tasmanian acoustic music scene. This CD is a welcome return by Neil to the music scene. With a preponderance of comedy songs (Neil is a devotee of Monty Python) this album also has the captivating “Hippopotamus Blues” as Neil’s latest 1920′s tribute. A great Tasmanian songwriter and a great sense of humour.