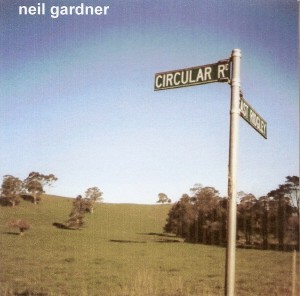 If “Star-Crossed Plovers” had been something of a cathartic experience, “Circular Road”, my next album, was a much more mellow and contented piece of work.

By the late 1990’s, Mike Raine had established an impressive studio at his home in Ranelagh in the Huon Valley, only a few miles from where I had picked apples at Cradoc in 1969 and 1971. He was looking for projects to cut his teeth on. Apart from lead vocals, my acoustic guitar and the piano on “Living in Denial”, Mike did everything on the album.

Mike and I had started our musical careers together playing church coffee shops in Ulverstone, in the magical spring of 1967. Better than most, I think Mike understood my principal influences and where I was coming from musically. There is more than a hint of 1967 in the flavour of the arrangements that he constructed for this album. In the notes for “Anthem for Wednesday” I mentioned an “inner pastoral landscape” where many of my songs are located. This album is located fairly and squarely in that landscape and Mike’s production and arrangements very successfully evoke that inner world.

1. Head in the Clouds

Sister Brendan my favourite teacher from the Smithton Convent School reckoned that I was a daydreamer, with my head in the clouds. Many years later my daughter Amy reached the same conclusion. This song is therefore an unashamed self-portrait. I gave Mike a rough tape of the first two verses of the song. He got to work and added a chorus and middle bit. I then added a third verse. It was only my second collaboration – the first being with Celia Sprockett for “Brown Tongue Woman” on “Star Crossed Plovers”.

This little song is a true story about a moment of epiphany I had at a beach in Circular Head as a small child. I could hear a magical music somewhere in the distance with no obvious material cause. It was at once beautiful and bewildering and one of the most profound things that has ever happened to me.

This is an apple picking song about an imaginary circus girl that was probably applicable to a couple of beautiful girls I knew at the time who were living dangerously with their beauty. It is not about the Penny for whom “Princess of the Clouds” was written. If you listen carefully at the end you can hear some sampled calliope sounds from “Mr Kite” on Sergeant Peppers.

This is some more autobiography about a magical day with my Grandfather and his draught horses on the farm at Scotchtown.

This song contains some idealistic words about reclusiveness and relationships that stand the test of time even though the relationship in question didn’t.

6. Life Will Never Pass Her By

This song was inspired during a brief return to Hobart from Sydney in mid 1973.

It is a return to the pantheist love of nature that inspired so many of my earlier songs. It celebrates the fact that elderly people in their gardens can remain a part of eternal processes of growth and renewal.

This song is another example of Mike’s genius for constructing a landscape in sound. This time it is an idyllic celebration of a river sprite, someone like Tom Bombadil’s Goldberry in “The Lord Of The Rings”.

This optimistic celebration of a now defunct relationship nearly didn’t make it onto the album. Mike is happy with the sound he got, but I think he recorded the definitive version of this song more than twenty years earlier in my flat in Albeura Street on a Sony two track with one acoustic guitar and his wife and sister helping out with backing vocals.

The germ of this song hung around in my head for more than thirty years before I was able to finish it with a middle bit in 2000. It’s a wistful bluesy number about a typical rainy day in Tasmania. The subject, yearning to escape to the tropics, does so only to find that it is raining there too. Mike created a wonderful Latin guitar sound using “Sweet One”- his first guitar (a Sweet Tone) that boasted only two nylon strings at the time of recording.

This is probably my favourite recording because it fulfils a long standing desire to do a piece of genuine rock and roll. The hero is a loser in the same vein as “The Existential Cowboy” and “Poor Forgettable Me”.

We took the opportunity to revisit the final track from Anthem for Wednesday to take advantage of thirty years of development in musical competence and recording technology. Not taking anything away from the earlier version, this second recording of Marianne is very close to the way I always heard the song in my head.

This was the first track we recorded for this project. Mike wanted it to be the opening track and to close the album with Marianne. While I think Marianne is arguably the climax of the album, I thought that “Sweet Euphoria” with its sense of resolution was a more appropriate and contented conclusion. The mysticism and pantheistic spirituality contained in the song remain very close to my heart.

Having lived with the songs on this album and their progression for months, I feel I can offer a unique perspective on the achievement that is Circular Road. While most of the songs were composed before my time, I have witnessed their development, mainly in the back room at Burnie or on the piano at home. These songs have each come to life at different stages, sometimes easily and sometimes through sheer perseverance. Usually undergoing a complete chemical and physical change after entering the Ranelagh Province, the songs have come to fruition with the assistance of Mike.

The album captures a wide array of emotions, ranging from the melancholic ambience of Sweet Euphoria and the peacefulness of A Day By The Sea, to the bizarre and ironic wit of Living In Denial! not to mention the jollity of the supermarket samba, otherwise known as My Sweet Lady Love.

I recommend this album to all with a sense of humour, a strong spirituality or an odd twenty dollars to spare.

Use Boscoe’s Pulverised Sheep Manure when all else fails, and take a trip to Ridgley when you’ve time, to see some of the most beautiful countryside in the world.

A year or so ago I profiled veteran singer-songwriter Neil Gardner in Drumbeat. The profile was prompted by the release of Neil’s first album in a decade, Star-Crossed Plovers. Gardnerphiles will undoubtedly be pleased to learn that a follow-up CD is now available. Engineered and produced by old friend Mike Raine, it is a lovely, often wistful recording and, in my view, the best thing Neil has done to date (Ginger Mixture notwithstanding).

As the title implies, Circular Road is a varied (but still cohesive) mix of material from all phases of Neil’s musical evolution. It includes a number of affectionate tributes to key influences. ‘Penny’ and ‘Life will never pass her by’ instantly evoke Sergeant Pepper; ‘Isobel’ and the exquisite ‘River Song’ recall Donovan. There is dash of Noel Coward in ‘Animal Babies’, while ‘Living in Denial’ is full-on, gleeful rock ‘n’ roll. There is even a fleeting tribute to the Kweskin Jug Band in ‘Rainy Day’. Elsewhere, ‘My Grandfather’s Horses’ and ‘A Day by the Sea’ are gentle paeans to a childhood spent in the Circular Head district.

Circular Road eloquently celebrates Neil Gardner’s skill and expertise as songsmith – and, also, Mike Raine’s virtuosity and inventiveness as producer and multi-instrumentalist. For me, two tracks stand out above the rest: the poignant yet anthemic ‘Friendship Song’ and a new recording of a Gardner perennial, ‘Marianne’. (‘Marianne’ originally concluded Neil’s 1971 LP, Anthem for Wednesday). Mike dresses up this new version with a heartbreakingly simple string and keyboard arrangement. The result is magical.